The journey from smart ships to electric ships

Are ‘Tesla’ ships the future of maritime shipping? The development of smart ships has already started and now the maritime market has taken it to the next level: all-electric ships are slowly coming up. But what are the benefits of electric ships? And which electric vessels are already in use? Find the answers in this blog!

A few months ago we wrote about the development of smart ships. Smart ships can be divided in two categories: unmanned ships and autonomous ships. The difference between these two categories is that unmanned vessels are ruled by an operator from a control centre onshore. In contrast, autonomous ships use a computer on board that takes decisions about the route, speed, fuel consumption, maintenance and even mooring in the harbour. To make sure everything is under control, an autonomous ship is always connected to an on shore control centre.

Want more information? Read the full blog about this topic!

Smart ships run without crew on board and most of the time they operate with conventional propulsion systems that work with heavy fuel oil or diesel. But now the technology has taken it to the next level: electrics ships are coming up. These ships are driven by electricity instead of the conventional fuels. It is comparable with the development of electric cars and the working principle is similar. Instead of diesel engines, electric ships contain batteries to keep the vessel going.

The development of electric ships is not without a reason. First, the use of electric-driven vessels has a positive effect on the environment. The fuel consumption of a ship decreases and oil-emission is reduced. Second, the space required for installation of electrical propulsion machinery is much less and is compact in comparison with conventional systems. This results in extra load space on a ship. And third, the life cycle costs are reduced due to less fuel consumption and lower maintenance costs.

Electric vessels that are already sailing

China is the proud owner of the world’s first all-electric cargo ship, and the ship is already in use. Guangzhou Shipyard International Company Ltd. constructed the ship and it was launched in the city of Guangzhou in November 2017. The 70.5-metres-long vessel can travel 80 kilometres after being charged for two hours and has a maximum travel speed of 12.8 kilometres per hour. 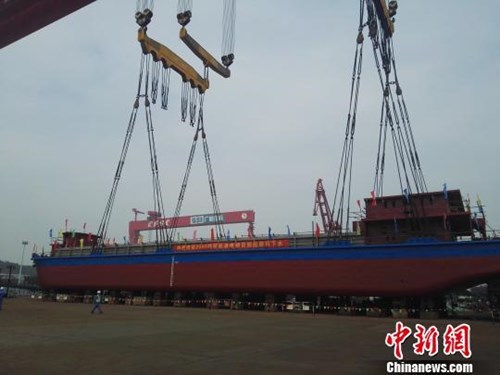 The Norwegian Shipyard Fjellstrand constructed – in collaboration with Siemens and Norled – the first electric powered car ferry: the Ampere. The ferry is 80 meters long and 21 meters wide and it accommodates up to 120 cars and 360 passengers. After two years the results were impressive: emissions were cut by 95% and costs by 80%.

These results made the Norwegian Parliament go one step further: Norway’s world heritage fjords, like Nærøyfjord, have become popular tourist attractions and this resulted in local air pollution. To halt emissions from cruise ships and ferries, the fjords will be zero-emission zones by 2026 where only electric ships will be able to go.

Image credit: Courtesy of Fjellstrand AS.

How our sealing solutions contribute

Our Supreme Ventus® air-type seal guarantees this and is VGP compliant. To respond to the development of electric, autonomous ships this sealing solution is 100% Intelligent. This means that the condition of the Supreme Ventus 24/7 insightful is and readable from a distance.