Corrosion has been an important topic in shipbuilding history since mankind started to use rivets to assemble ships. It is a natural process, which converts a refined metal to a more stable form, such as its oxide, hydroxide, or sulphide. It is the gradual destruction of materials (usually metals) by chemical reaction with their environment. In this blog we will explain the common kinds of corrosion ships are faced with on their seal and the top 3 solutions to prevent it.

As already stated, corrosion is a natural process, that converts a refined metal to a more stable form, such as its oxide, hydroxide, or sulphide. For this process, some form of water is required, such as sea water or moisture in air; it is the gradual destruction of materials (usually metals) by chemical reaction with their environment. So simply explained, the oxygen (O2) from the water binds with metal molecules and forms corrosion. This process is caused by a difference in electrical loading. With different kinds of materials comes different kinds of corrosion and ways in which you can prevent it.

As can be seen below, electrons separate from the anode and in combination with the O2 from the water corrosion is formed on the cathode. 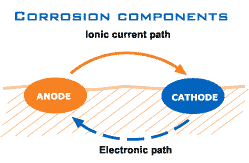 To start with, ships were made out of wood and made out of steel since the industrial revolution. The rivets were not very corrosion resistant as they were originally made out of ordinary cast iron. Seal housing parts used to be made out of cast iron as well

To date, the housing parts of a seal are made out of bronze, an alloy consisting primarily of copper. Bronze does corrode, but a lot slower when compared to cast iron or ordinary steel. Corroded bronze has a green colour. In the image below a seal housing is shown with corrosion. The second image shows some accretion, but this does not affect the functioning of the seal. 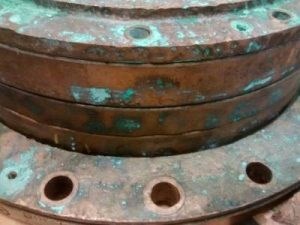 The liner of a seal is made of chrome steel, which basically is steel with chrome added to increase the resistance to corrosion. Mostly an HML (Hard Metal Layer) coating layer is applied to improve the resistance against wear and corrosion. This layer is harder than the rest of the material and of a different composition. A liner completely made out of hard metal is very difficult to manufacture on a lathe, so instead the hard metal is added to the liner as an extra protection layer.

Another form of corrosion is called pitting. Pitting is a form of localised corrosion that leads to the creation of small holes in the metal. A small metal area is depassivated and becomes anodic. If a large area around that spot becomes cathodic, this leads to localised corrosion. Pitting can be initiated by a small surface defect, being a scratch or a local change in composition, or damage to the protective coating.

For this reason, most vessels use an anode to protect the submerged part of the ship. These anode blocks (mostly made out of aluminium) will sacrifice themselves and protect other metals from corrosion. Zinc or magnesium can also be used as anodes, although magnesium can damage the paint layers as well due to the high potential difference. Lagersmit offers the option to protect the seal housing using aluminium anodes. 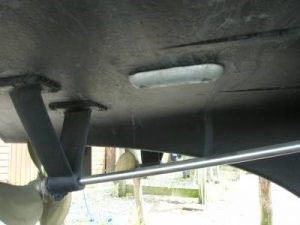