Many customers have asked us about what makes a good lip seal. As a first step we would like to provide you with a short introduction into what is meant by vulcanised rubber. Vulcanisation is an important process in the making of lip seals. This blog describes rubber properties and the process of vulcanisation. Lip seals are always vulcanised, otherwise the rubber would be fluid and will not retain its shape under pressure. The Supreme® lip seal is shown in figure 1. 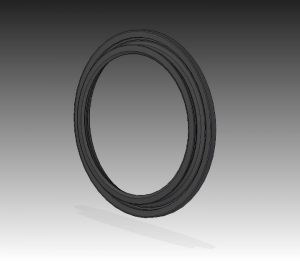 Some people in the industry use the term elastomer to describe rubber. An elastomer is built up out of monomers that make a chain-like molecule. Rubber exists out of a fine maze of molecules with a low tensile strength and cannot be compressed. After deformation, vulcanised rubber will return to its original shape. Many different types of rubber exist with varying properties.

“Lip seals are always vulcanised, otherwise the rubber would be fluid and will not retain its shape under pressure.”

Vulcanisation is the process where viscoelastic polymers are connected to each other by cross links. Vulcanisation happens by adding heat to the rubber (for instance in an oven). The cross links are chemical connections that cannot be broken selectively after formation. After vulcanisation, the connections between the polymers prevent the rubber from taking any other shape. The vulcanised rubber will always return to its original shape while unvulcanised rubber can be forced into a different shape. 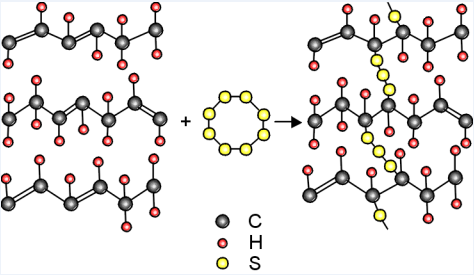 The vulcanisation process involves adding heat to the rubber for a specific amount of time which initiates the process of making chemical connections between the rubber molecules. A simple example can be made by comparing a boiled egg to vulcanised rubber. Before the egg is boiled it is fluid and can be moulded into any shape. After boiling, the egg has a fixed shape and will return to its original shape when deformed (unless too much pressure is applied).

“A simple example can be made by comparing a boiled egg to vulcanised rubber.”

The main vulcanisation cross links are either formed using sulphur (NBR rubbers) or peroxide (FKM/FPM rubbers) connections. The properties of the final vulcanised rubber depend upon the cross links and the rubber compound itself. Wondering if you should choose for NBR or FKM seals? Find out in our blog about the Vessel General Permit or download the VGP whitepaper.