The Delta Works in a nutshell. The Delta Works are a defence system in the Netherlands to protect against sea floods particularly along the provinces of Zeeland, the southern part of Zuid-Holland and Noord-Brabant. The Delta Plan had been conceived prior to the 1953 flooding disaster, although its necessity only became clear following this disaster. The plan to shorten the Dutch coastline by approximately 700 kilometres by constructing closed and permeable dams between the islands of the provinces of Zuid-Holland and Zeeland was initiated. As a result of this plan only the westernmost dikes had to be raised and reinforced, while they could be left intact further inland.

In 2009, the Directorate-General for Public Works and Water Management (Rijkswaterstaat) Zeeland decided to replace the 64 seals in the Roompot lock with Lagersmit seals. Rijkswaterstaat wanted a reliable, environmentally friendly solution for the navigation lock gates, each of which weighs over 230 tonnes. The weight, combined with the fact that the wheels are located 10 metres below the surface, means that the quality of the seals has to meet high standards.

The Supreme LD seal is an environmentally friendly addition to the reliability of the Roompot lock. Rijkswaterstaat ordered 64 specially manufactured bronze Supreme LD seals and the first 32 seals were delivered in mid-June 2009. The Supreme LD is normally produced in cast iron. However, for this project it was decided to use bronze because it is better able to withstand seawater. A sand barrier was also constructed to prevent sand and fishing lines from causing any disruptions.

Rijkswaterstaat values Lagersmit’s flexibility and fast delivery times. Lagersmit has a great deal of expertise in lock-related solutions. This is why Rijkswaterstaat is a well-known entity to us. For example, in 1987, the new locks in Hansweert were equipped with lock gates moving on bearing-wheels that had to keep out all dirt and water. Eighty specially adapted Lagersmit Supreme seals were incorporated into the wheel assemblies for the locks.

Would you like to know more about our lock solutions?

In addition to the Roompot lock project, we recently cooperated on the replacement of the shaft seals for the Park Locks in Rotterdam. If you would like to know more, take a look at our water page or contact us! 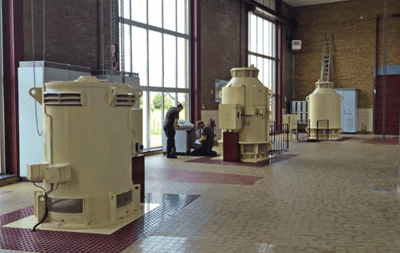