Lagersmit regularly designs and delivers seals for amazing projects. The Dallas Floodway System is one of these projects we’re very proud of. This project includes six different pump stations and so far Lagersmit has delivered seals for three of these stations: Pavaho (2011), Baker (2013) and Able (2015). The Water Environment Federation wrote an article about the Baker project which we couldn’t describe any better:

The Baker No. 3 Pump Station is one of six storm water pump stations owned and operated by the TWM. These pump stations operate to minimize flooding along the Trinity River corridor within the city limits. The stations make up the pumping arm of the Dallas Floodway System, which was constructed originally during the 1930s to reclaim and protect land from the devastating floods caused by the Trinity River. The system includes:

The programmatic portion of the system is the TWM’s Interior Drainage Program, which seeks to minimize flooding and the potential effects to the surrounding neighbourhoods and businesses. The programme optimized the city’s capacity and prioritized pump station improvements for both the West and East Levee systems. Statistical hydraulic analysis and hydraulic modelling of the flood control system occurs as part of the programme. The programme recommended improving six existing flood control pump stations — including Baker No. 3 — and adding two additional pump stations to the system. Baker No. 3 Pump Station is located in West Dallas. It provides flood risk management for the 100-year, 24-hour storm event for a 14.11 km2 (5.45mi2) drainage area and protects more than 50 businesses and numerous undeveloped properties.

Lagersmit, Flowserve and the city of Dallas

To support this complex and important project, Lagersmit has delivered eleven seals so far for the Dallas Floodway System. Four of them were used in the Baker No.3 Storm Water Pumping Station. For this project, pump manufacturer Flowserve and Lagersmit cooperated very closely to manufacture the best pumping system completed with the best sealing system for this purpose. Flowserve has delivered four Flowserve BCV 210 pumps and Lagersmit four LDS-460 Liquidyne hybrid shaft seals.

Our Liquidyne LDS-460 is characterized by:

Delivering peace of mind was one of the key aims. The standard Liquidyne design is equipped with metric screws , but in order to more easily carry out maintenance in Dallas, this sealing system is specially designed to use UNC screws. Together with the condition monitoring function of this Liquidyne seal, peace of mind is assured.

Interested in more information about this project or our sealing solutions? Please do not hesitate to contact us! 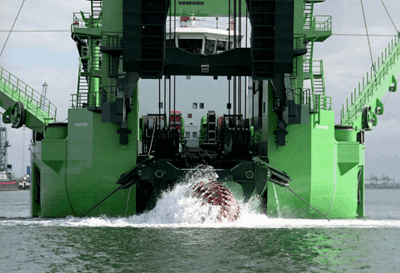 How the settling pipe protects your Liquidyne from wear