The workshop consisted of a theoretical and practical training in compliance, monitoring and enforcement of the Convention. The participants also received information about how to plan and implement a port biological baseline survey based on IMO’s protocols and how to conduct a risk assessment. These baseline surveys are designed to provide inventories of marine life in and around commercial ports that are visited by ships carrying ballast water. Such surveys determine if any non-indigenous species have been introduced in the area and provide a guideline of biological data against which future changes can be measured.

Looking for more information about ballast water sampling and analysis? Watch the video IMO has published about these topics.

Going into dry dock for a ballast water management system?

When you are going into dry tock to retrofit the Ballast Water Treatment System, you might want to make your vessel completely proof for all sustainability regulations. The Supreme Ventus® and Supreme Athmos® are our environmental friendly solutions that guarantee zero-emission and are in compliance with the Vessel General Permit.

On 8 February 2018 Qatar has acceded to the Ballast Water Management Convention (BWMC). By this accession the total number of contracting states has reached 68, which represent more than 75 percent of the world’s merchant fleet tonnage.

IMO’s Ballast Water Management Convention entered into force on 8 September 2017 and contains two standards, the D-1 and the D2-standard. The D-1 standard requires vessels to exchange their ballast water in open seas, away from coastal areas. This is at least 200 nautical miles away from the coast and at least 200 meters water depth. With this distance, less organisms will survive and the introduction of invasive species will be reduced. The D-2 standard specifies the maximum number of viable organisms that are allowed to be discharged by ships.

These systems must be approved by national authorities, according to a process developed by IMO. Systems have to be tested on board ships and in a land-based facility to confirm that they meet the standards. Nowadays, more than 60 ballast water treatment systems have been approved by IMO.

A few weeks ago IMO decided that vessels have two more years to meet with the D2 standard. The Convention would actually enter into force on 8 September 2017, but IMO decided to postpone the inauguration for two years. This means that it will take two more years until the increase of Ballast Water Treatment Systems and the installation of this will take place. However, the date when ships have to comply with the D1 standard stays the same: 8 September 2017.

Download DNVGL’s brochure ‘How to comply with the IMO Convention’

What does this mean?

On 8 September 2017 the treaty will enter into force. From that moment ships have to comply with the requirements of the D1 standard. This means that vessels have to refresh their ballast water during their journey.

Find more information about the possibilities of the renewing of the IOPP certificate on: www.dnvgl.com

How about the USA?

The United States have their own requirements about ballast water and these don’t accord with the demands of IMO. The US Coast Guard (USCG) gave a few options for ships sailing in American waters:

An option for vessels is also to not unballast their water. If ships can’t comply with these requirements, inspections, delays and preservation will take place.

On 8 June the Bahamas deposited its instrument of accession and Singapore followed accession on the same date. Ratification by Australia on 7 June, accession by United Arab Emirates on 6 June and Saudi Arabia became a Party in April. This brings the total of States party to the BWM Convention to 59, which is 65.18 % of the world’s merchant fleet tonnage.

The Convention will require vessels to manage their ballast water on 8 September 2017. Ships may take ballast water onboard for stability, but this is not without a risk. The ballast water can contain thousands of marine or aquatic plants, organisms and microbes, which are carried around the earth. By releasing untreated ballast water at the ship’s destination new invasive marine species could be introduced. Hundreds of such invasions have already taken place and sometimes this resulted in damaging consequences for the local ecosystem.

In the diagram you can see a few statics about this issue. For example: 7,000 species are transferred in ballast water every hour per day and one invasion takes place every nine weeks. These numbers have a huge effect on the environment.

WILL THE MECP EXTEND THE BALLAST WATER MANAGEMENT IMPLEMENTATION DATE?

Updated: 18-11-2016)
The IMO Ballast Water Management Convention comes into force on September 8, 2017. During the 70th session of the IMO’s Marine Environment Protection Committee (MEPC 70), there was a lot to discuss. Two topics took the most of the time: when should the new G8 Guidelines be implemented and should the current approved implementation date between 2017 and 2022 be extended or not?

Will the implementation date be extended?

The revised G8 guidelines for ballast water management systems, which were prepared the week before MEPC70, are approved during the 70th session of MEPC. This means that the guidelines issued in 2008 are updated.

According to IMO (2016), the approval procedures for the ballast water management systems are updated in the revised guidelines. Examples are: more robust test and performance specifications, more detailed requirements for type approval reporting and control and monitoring equipment. Read more specific details about the revised guidelines here and here.

Updated: 16-09-2016
Due to the accession of Finland, the total number of contracting states to the treaty has reached 52, which represents 35.1441% of the global fleet by tonnage. This means that the convention will definitely enter into force on September 8, 2017.

At first there was uncertainty among ship owners because no systems were yet approved by the US Coast Guard. But it was recently announced that various parties are in negotiation with the US Coast Guard for approval of their systems.

Did you know… according to Clarksons, 2.6% of the total fleet have now installed a Ballast Water Management System on their vessel.

After nearly two months of uncertainty it is now clear the IMO’s Ballast Water Management (BWM) Convention will not be coming into force in 2016. The convention requires for ratification by states controlling a combined 35% of the global fleet by tonnage, however, it has now been found that despite Morocco, Indonesia and Ghana ratifying last November the threshold has not been reached.After tonnage figures for Indonesia were verified by IHS Maritime & Trade it was found that the 47 countries that have ratified the convention control 34.56% of the global fleet by tonnage. Had the 35% threshold been reached the convention would have come into force on 24 November 2016, this will now not happen, and it will not come into force until at least 2017.IMO secretary-general Kitack Lim said, “The recent ratifications have brought the BWM Convention so very close to entry into force. While we cannot predict exactly when that will happen, I would urge countries that have not done so to ratify the BWM Convention as soon as possible so that we can establish a certain date for entry into force, and also so that it is widely accepted when it does. “In particular, those countries with large merchant fleets that have not done so, are requested to accelerate their processes to ratify the convention.”The convention will likely be ratified later in the year as the world’s largest flag-state Panama has started the accession process, although this will take several months. Finland had been expected to ratify the convention last November but as yet has not done so.The BWM Convention will come into force one year after it reaches the required level of ratification.

In May 2015 the International Maritime Organization’s Marine Environment Protection Committee the 68th session was held. Despite positive signals from several states that they are preparing ratification instruments for the Ballast Water Management (BWM) Convention, the conclusion left ship owners and system vendors with no firmer timeline on when the Convention will come into force. It also became clear that the decision to revise the G8 Guidelines addressing approval of ballast water management systems, while important to the Convention’s future, will be a lengthy process covering many different issues.

No penalty for early movers
While no new ratifications to the Convention were announced at MEPC 68, progress was made on continuing the revision of the G8 Guidelines and the development of a mechanism that does not penalize the early movers who specify systems ahead of ratification. In order to make progress on the issue and attempt to give owners some reassurance, MEPC agreed to a roadmap for the implementation of the BWM Convention in a way that addresses non-penalization.

It is clear that proper review, approval and survey of installed BWMS and ballast water management plans by a classification society is paramount to prove that clauses are upheld. 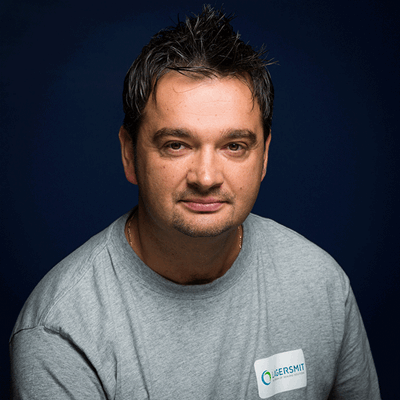 Lagersmit continues to be ISO 9001 certified

Meet Lagersmit during the Europort