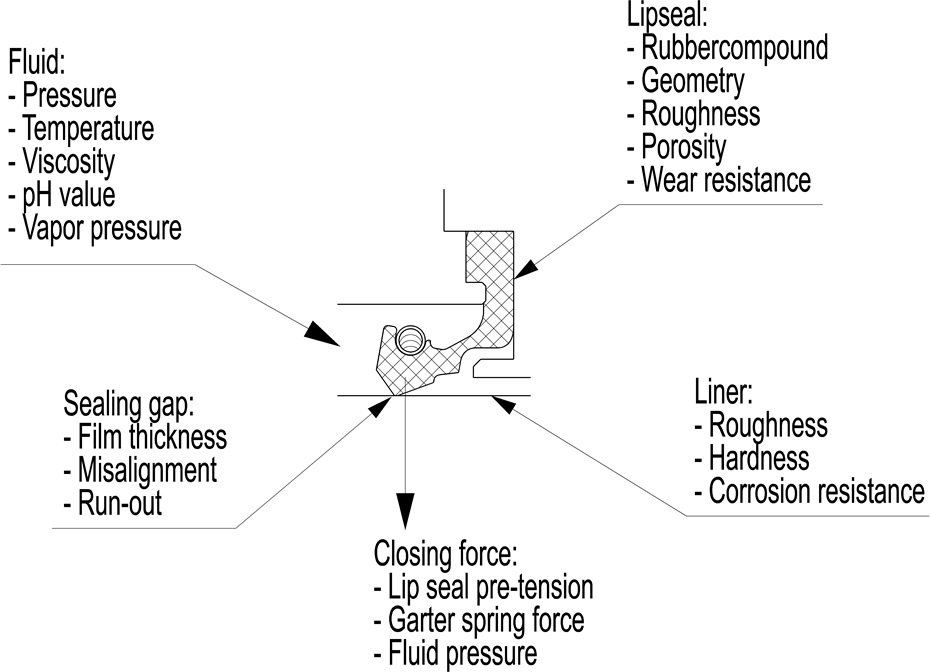 As can be seen in the figure above, there are different factors affecting proper functioning of the lip seal. For a radial lip seal, the sealing function depends on the mechanism that is capable of bringing a hydrodynamic lubricating film between the lip seal tip and its counter surface on the liner. During running in, the lip seal tip will wear and the sealing edge will be formed and roughened. The area occupied with the lubricating film is called the sealing gap. In the former blog of Factors affecting the sealing function, the temperature increase was discussed.

This blog will focus on the rubber compound selection of the lip seal and the static seals used in Supreme® seals. Lagersmit delivers NBR, FKM and FKM-EAL lip seals. In most cases the selection in compound can be made by investigating the application and comparing the following compound properties; temperature resistance, wear resistance and chemical resistance.

If for example the Supreme seal is applied to a semi-submersible vessel or a retractable thruster, the draught to the shaft centreline has a relatively high effect on the friction. With increasing friction, the temperature will increase as well.

The different elastomer compounds each have their own operational temperature range. NBR for example has a maximum operating temperature of 100°C. FKM can withstand higher temperatures up to 130°C. By calculating the PV value [bar × m/s] – pressure difference × velocity – Lagersmit can advise the proper lip seal compound for each Supreme seal.

With regard to the new Vessel General Permit regulation of December 2013 it is now prohibited for commercial vessels with an oil-to-water interface to sail with mineral oil in US territorial waters. Therefore oil suppliers are continuously working on new formulas of VGP approved environmentally acceptable lubricants (EALs).

It is known that hydrolysed EAL*, causing a pH drop, has a negative effect on the physical properties of the lip seal compound. NBR compound tends to swell significantly, while FKM shows better resistance to volume change, caused by an increased acidity of the lubricant.

Through research, a new FKM compound has been engineered that shows even less physical property changes in hydrolysed EAL than the standard FKM compound. This compound is called FKM-EAL and it is advised when EAL is used.

A practical guide for ship owners whose vessels are sailing in US waters.